It’s becoming extremely rare in the modern age of manufacturing to find a car that purportedly isn’t safe. Modern cars are supposed to be, at least. It doesn’t matter whether it’s the pint-sized Honda Jazz or the barge-on-wheels Audi A8; four or five safety stars (out of a full five) have almost become the norm.

That’s left one particular carmaker in quite an awkward spot recently. Dacia isn’t a brand known to Singapore (its business model would be decimated by our taxes) but the Renault-owned Romanian carmaker moves huge volumes abroad thanks to its cheap yet supposedly indestructible cars. 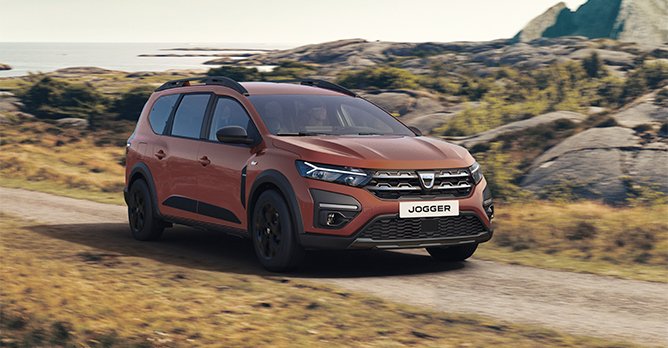 Over the last six months, however, at least three of the carmaker’s models have gotten just a single Euro NCAP star, culminating in the seven-seat Dacia Jogger most recently. (Adding insult to injury to its parent company, the facelifted Renault Zoe got 0 stars around the same time as the Dacia Jogger and Spring’s ratings.) To add an interesting twist to the mix, responses by spokespeople were repeatedly dismissive – including one where the following statement was made:

“[W]e are not chasing Euro NCAP stars when they are related to electronic aids”.

While framing the results as the natural consequence of conscious choices to omit certain types of equipment, the firm has also argued that its cars are in fact very safe. This begs the question: Are Dacias really unsafe, or have they simply not played by the rules well enough? If so, what sorts of questions do they raise about how safety is portrayed and understood in the auto industry now? 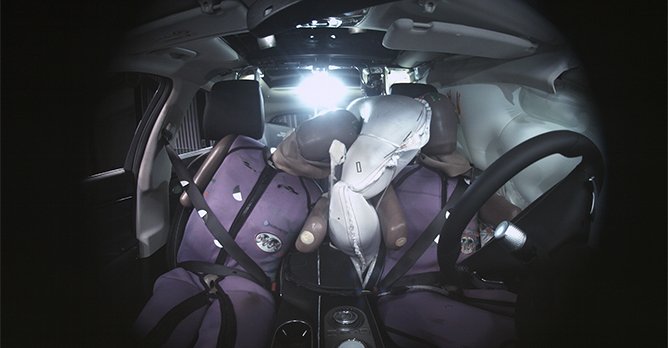 As a brief recap, the ‘NCAP’ in Euro NCAP stands for New Car Assessment Programme. While not the first to emerge globally (honours go to the American NHTSA for that), it’s become perhaps the leading benchmark for a car’s safety credentials, often greeting us in the pages of new car brochures.

Euro NCAP clarifies on its site it currently relies on four pillars of assessment to derive the number of stars awarded to any specific model.

The first two – centered on Adult Occupants and Child Occupants – probably line up with what most of us have in mind when we think of a car’s safety: What happens inside the car should a crash occur. Scores are given based on impact tests to simulate frontal, lateral and rear collisions, while a ‘whiplash’ component was even added in in recent years. 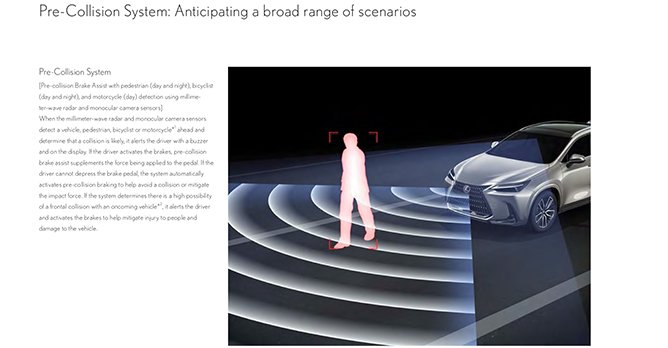 Things get a little bit more complicated when we get to the next two pillars, where a vehicle’s Auto Emergency Braking system is pit against different foes – against other exposed road users like pedestrians and cyclists (‘Vulnerable Road Users’) and against other vehicles themselves (‘Safety Assist’).

In the former, the physicality of the car is still taken into consideration more heavily; various objects are used to simulate the impact of the car’s bonnet against a head, arm and leg. The thought may initially be quite gruesome, but the tests admittedly make sense in simulating what might happen under real-world conditions.

But ‘Safety Assist’ is where the electronics are truly put through their paces. Does the car monitor if its driver is drifting off at the wheel? Is there lane-keeping support, or visuals on the dash to remind someone of their speed? Safety features one would label as properly modern are weighted in here.

To get an idea of how things work, the following is Euro NCAP’s official crash test video for the latest Lexus NX350h, which earned the full five stars. 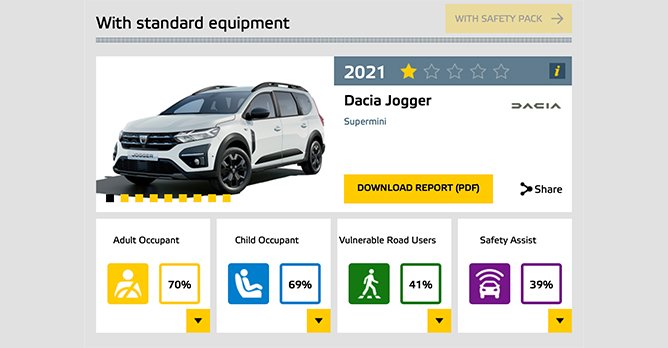 Breaking things down based on the detailed criteria paints a more accurate picture of where the Dacias (and Renault Zoe) stand. The Zoe’s 0-star rating is clear, and inexcusable, since it flunked all four components. Ditto for the Dacia Spring EV.

But the image is a bit more mixed on the Dacia Jogger. It scored 70% and 69% under the Adult Occupant and Child Occupant pillars – actually more than commendable scores – before nose-diving to 41% for Vulnerable Road Users and then remaining in the doldrums for Safety Assist at 39%.

One can imagine the Jogger hovering just below the two-star line – in need of just a slight push on one of the latter two components to gasp across. But alas, it didn’t.

In flux over time: How ratings are constantly changing 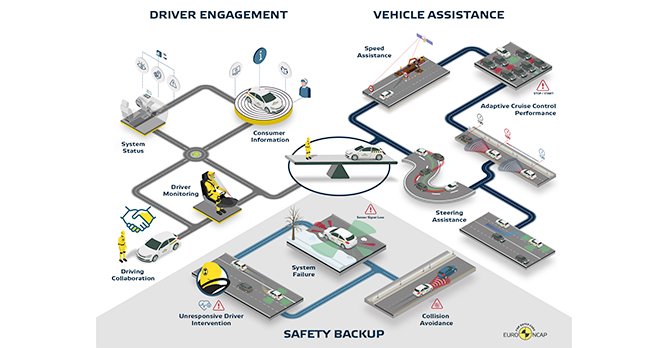 Wind the clock back pre-2009, and one pillar disappears from the Euro NCAP ratings; ‘Safety Assist’ didn’t exist back then. Go back even further to 2003, and ratings for occupants hadn’t even been categorically separated for both adults and children.

A large chunk of this constant work-in-progress nature stems from a broader societal desire to see our roads becoming safer. Regulation is constantly grinding forwards to ensure that road fatalities disappear, and safer cars are an integral part of that patchwork. This is why ratings are routinely updated. (Euro NCAP states on its website that the latest ratings are always the most accurate.) 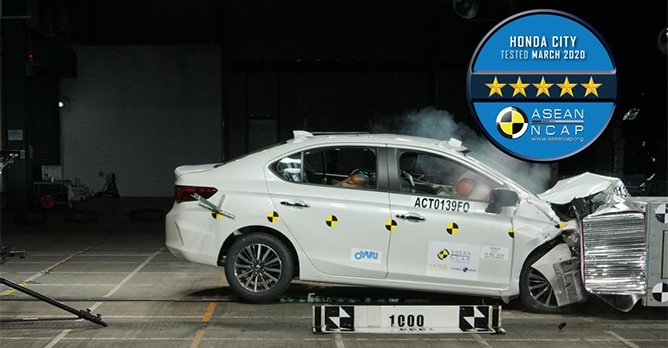 They’re constantly refined too. Across different regions, context-specific factors also come into play. Under ASEAN NCAP, ‘Motorcyclist Safety’ replaces ‘Vulnerable Road Users’, shifting the emphasis slightly to account for road conditions within the region. Under ratings by the American IIHS, a car will also only become a Top Safety Pick, for example, if its headlights are good enough, thus skewing the award towards cars with more expensive adaptive light tech.

Yet one single thread continues to tie the improvement of all these ratings together: The concept of passive safety versus active safety.

With the structural strength of a vehicle still forming the bedrock of ratings, the new focus on active safety explains why driver assistance and monitoring systems are increasingly taking a larger slice of the pie. 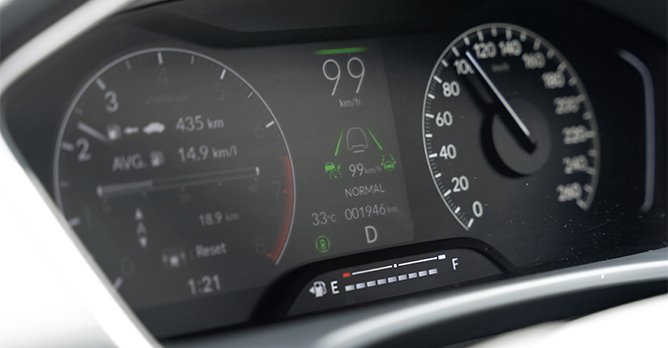 Perfecting, say, the rigidity of a car’s body in a crash will never cease to be important, but preventing that crash from happening is crucial too. That’s what occupant status monitoring – like actively surveying the driver’s fatigue or if passengers have been strapped in properly – as well as lane keeping alerts are supposed to do.

This is where the issue becomes a bit problematic, though. Safety assistance systems are surely expected to be served up as an eight-course meal on something like a Lexus NX, but economy (rice), in turn, reigns supreme in something like a Perodua Bezza or for that matter, a Dacia Jogger. According to the same Dacia spokesperson, “Many of [its] customers are not willing to pay for [electronic aids], and they are not understanding how to use them anyway.”

Still, it appears that the future is headed in this direction. More complex tests specifically designed for electronic aids were introduced by Euro NCAP in 2020, and although they currently still don’t count to the official ratings, it won’t be surprising if they do in a few years.

Too much: Genuinely useful or just superfluous bloat?


While Dacia’s stance on the utility of driving aids is debatable, they’re not entirely wrong in saying that many customers are often in the dark about how their cars actually work.

This could be attributed, on the one hand, to how inundating the sheer list of features available can be. To take reference from something that was just unveiled recently, here’s what the Mercedes-Benz T-Class has to offer in terms of safety, lifted directly from its press release (don’t worry if you get lost): 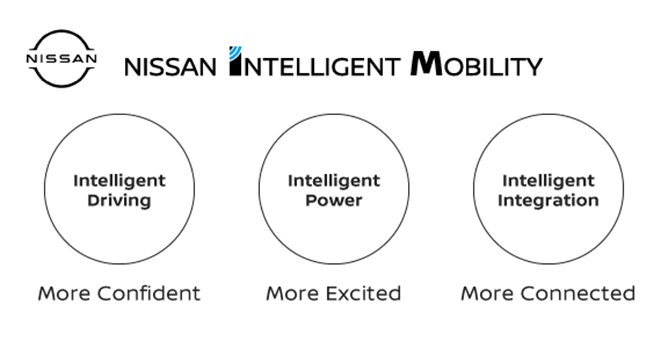 On the other hand, however, part of this confusion could perhaps also stem from the desire of each carmaker to differentiate itself from the competition.

Safety systems are grouped – and named – quite straightforwardly under an integrated suite of features in some instances. In the aforementioned Lexus NX, for instance, it’s called, well, “Lexus Safety System+”. (No questions there.) But under Nissan, something like adaptive cruise control is parked under “Nissan Intelligent Mobility”. That’s arguably angled more towards the idea of a smart car, and surfaces a subtle, but important difference.

No matter how significantly, the safety of our cars will invariably return into consideration for most of us as owners. On this tangent, the auto industry will continue – rightfully too – on its march towards safer cars, both in the passive and active sense. Will economy always be tied to lower standards of safety?

In the process, electronic driving aids may perhaps become cheaper, and find standardisation in the same way that a reverse parking camera is almost unquestioned nowadays. But then again, with the advancement of tech, it’s not hard to imagine that there will always be something newer, cooler and of course, safer, that the more upmarket players will be able to whip out. Does that leave the lower-end players trailing constantly? That’s honestly hard to answer.

Don’t get it wrong; this isn’t to say that the safety ratings we have aren’t valid. Five stars is certainly praiseworthy, while to get no stars at all raises eyebrows and red flags that cannot be ignored. Nonetheless, few drivers would slowly go through a laundry list of safety features when buying a car, only for the deal-breaker to be the existence (or lack) of something like ATTENTION ASSIST.

After all, safety ultimately lies not just with the vehicle, but also in the hands of the one actually steering it. No amount of stars will change the latter.

New Gtechniq For 2022 - Shop The Range At UF Today

Fri May 6 , 2022
Effectively establised as a single of the go-to manufacturers when vehicle detailing, for equally specialists and fans – indeed, it’s Gtechniq. And, the much more attentive reader may have seen that there has been a wonderful, shiny new Gtechniq rebrand for 2022! Made up of all of the good quality […]