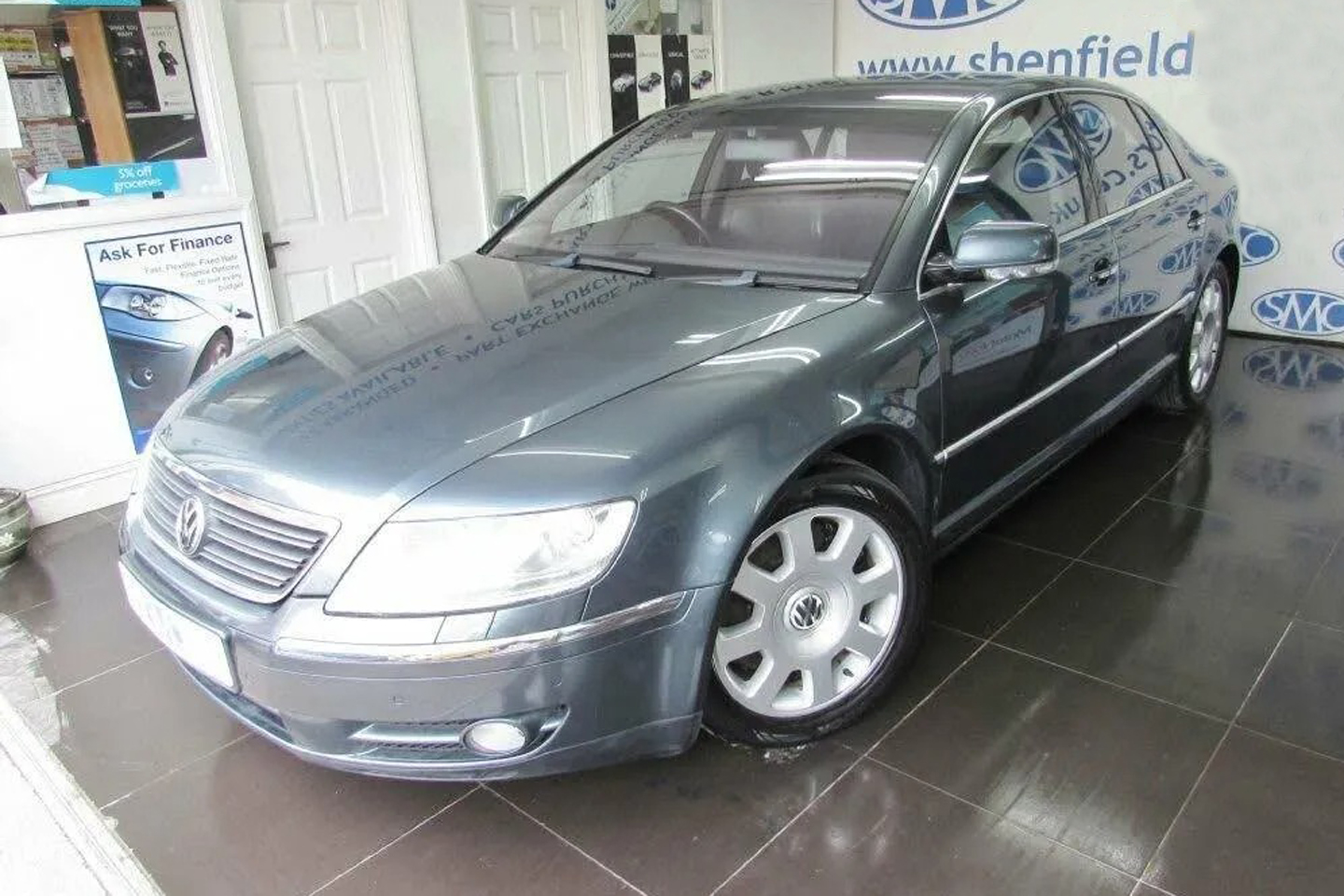 We need to thank the late Ferdinand Piech, one time Volkswagen Group uber-boss, for a significant percentage of our bravest Pills. But here’s one that completes the set, and has to be high in the running for the most courageous of the lot.

Okay, so this column is yet to feature a Porsche 917, but there are ticks against almost all of the other cars that Piech willed into existence, often using a management style that seemed to be based on Conan the Barbarian’s. The list includes the original Audi Quattro, W12-powered Bentley Continental, the slightly smaller W8 that was squeezed into a Passat and even the Bugatti Veyron itself. We’ve also featured this week’s engine twice before, the V10 diesel that was created more to demonstrate technical superiority than due to any rational criteria, although both times in the Touareg.

While the Touareg V10 is brave enough to streak at the winter Olympics, the Phaeton will always be the realer deal. This was the car born from Piech’s personal obsessions and desire to one-up rivals. Offended by Merc’s move into what he saw as Volkswagen territory with the first A-Class, Ferdinand decided to dispatch a tank to park on Daimler’s lawn. The corporate riposte would be an S-Class rival, one that wouldn’t just match the Sonderklasse which had enjoyed two decades at the top of its segment, but instead beat it in all key areas. 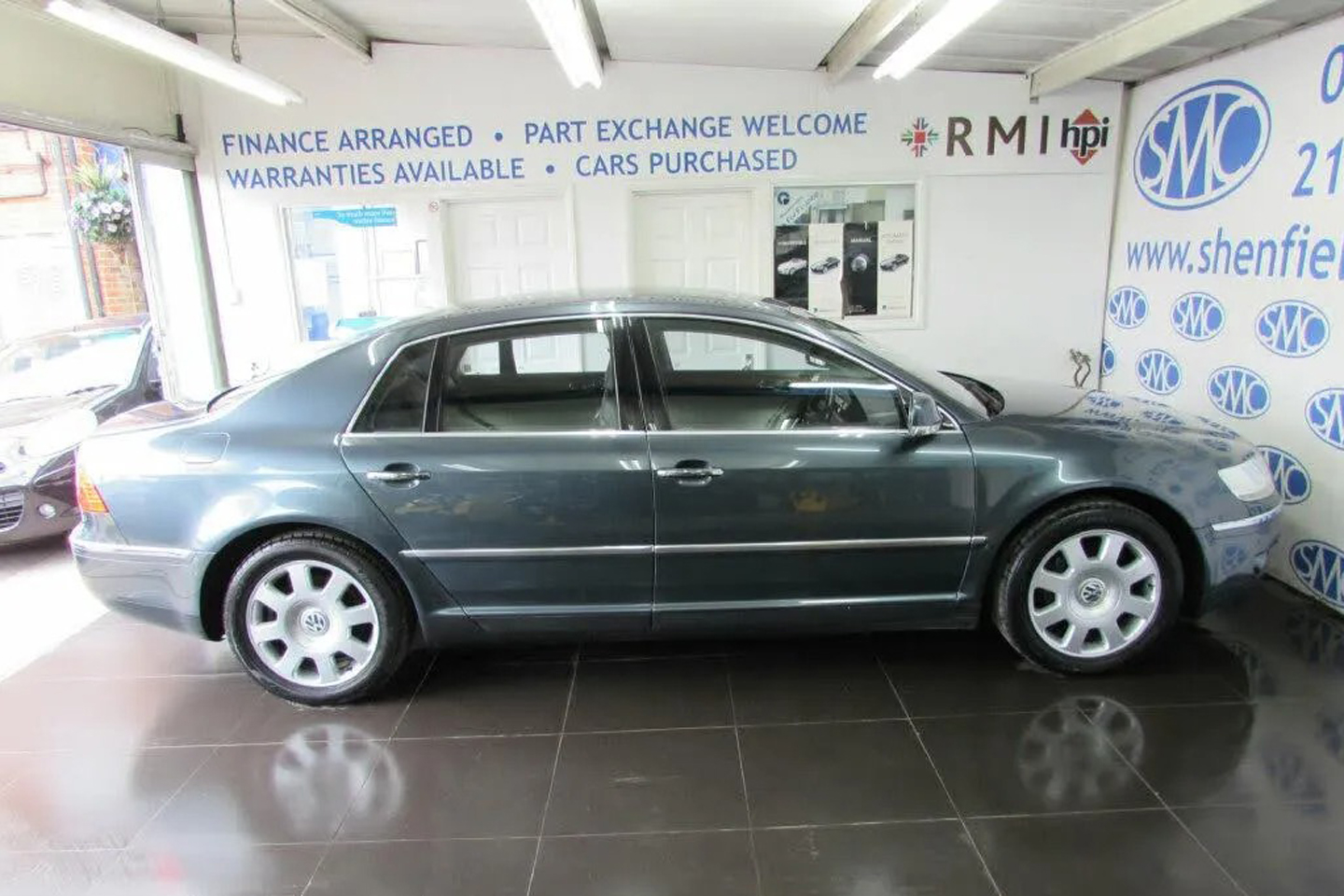 The Phaeton would have the grandest start in life, sitting on the same platform as the one created for the forthcoming Bentley Continental. But the need for Merc-beating performance with the range-topper also meant it would use the same 6.0-litre W12 engine that was being developed for its posher sibling, although without turbocharging. 420hp was still plenty, though.

But Piech’s other criteria of bestness for his manifesto product were more demanding, some to the point of obsession. One was that it would need a torsional rigidity of 37,000Nm/ degree – a figure which gave it the stiffest structure of any four-door passenger car in the world at the time. Another was that the bonnet could not visibly move, at all, even when the car was travelling at its top speed; this was clearly a Piech bugbear. He also ordered that it had to be capable of travelling through 50-degree ambient heat at 186mph while maintaining an interior cabin temperature of 22-degrees, this despite production versions being restricted to 155mph.

There was one obvious issue with the range-topping W12 engine: Europe’s rapid move towards compression ignition. These days Rudolf Diesel is more likely to be burned in effigy than celebrated, but at the turn of the century DERV really did seem to be the fuel of the future, and Volkswagen executives predicted that the profligate 12-cylinder would be a bar to sales in Euro-land. Elsewhere the group was already working on the creation of a new V8 diesel, so it was an obvious stretch to order a brawnier V10 that could sit above it and power the Phaeton and Touarag. One which had, as launched, 5.0-litres of swept capacity, 309hp and a huge 553lb-ft of torque. 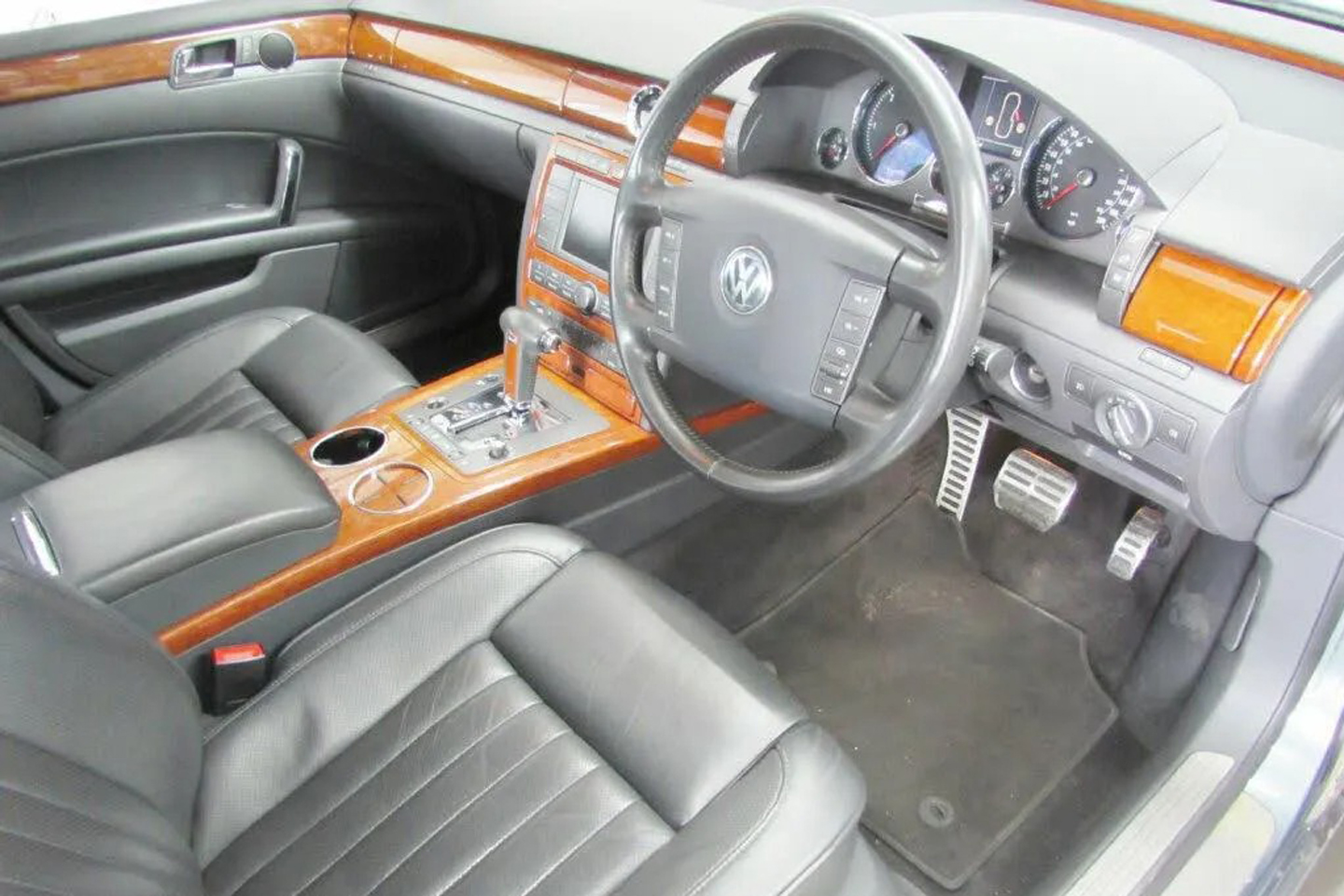 Huge effort was being spent on engineering and technology, with all but the basic V6 Phaeton getting all-wheel drive, air suspension, adaptive dampers and an early use of radar cruise control. But much less effort was spent on the Phaeton’s styling, which was smooth and muscular and did a good job at minimizing the car’s visual scale – even the short wheelbase version was over five metres in length – but also very obviously Volkswagen-y.

The Phaeton ended up bearing such a family resemblance to the contemporary B5 facelift Passat that owners of the grander car were constantly being asked if it was the cheaper one. Which was a bit of a marketing fail given the Passat kicked off at £15,000 while the boggo V6 petrol Phaeton listed at £43,000. Above that the V10 TDI was £58,000 before options – and the LWB W12 was nearly £72,000. That’s more than the £61,935 VW will charge you for the Touareg V6 R-Line which is the most expensive thing they sell in the UK in 2022, and means the daddy Phaeton cost the equivalent of £117,500 in our depreciated pounds. Which was crazy money.

Nor was the V10 a scintillating dynamic experience. Piech’s definition of luxury was all about being calm, fast and unflustered – all characteristics it did very well. The big diesel gave effortless ground-up thrust and never turned loud or coarse, even when pushed. Supple suspension pillowed and parried bumps and dips as appropriate, and if owners did want to travel along a searing desert highway at V.max the climate control would doubtless have kept them nicely chilled.

But these were all virtues by omission, and there was little joy to be found in what was always a mushy driving experience, to the extent the S-Class felt like a substantially sharper steer. My biggest memory of driving a press V10 TDI through London was the fraught navigation through width restrictors thanks to both the Fat One’s XL dimensions and a poor sense of where its extremities lay. That and the orange wood trim, with images of our Pill’s interior triggering flashbacks.

Piech had delivered on his vision of a perfect saloon, but it wasn’t one that many potential customers seemed to share. Granted the Volkswagen badge didn’t do the Phaeton many favours among brand conscious buyers, with the Phaeton being consistently outsold by the Audi A8. Before Phaeton production began Volkswagen told journalists that the brand new ‘Glass Factory’ in Dresden, another nine-figure bit of CapEx in its own right, would be able to make up to 20,000 Phaetons a year. It never got close – after the first four years of sales just 25,000 cars had been built. Sales actually improved later as the Phaeton grew popular in China, but by the time production stopped in 2016 only 85,000 had rolled off the production line.

Only around 2,000 of these ended up coming to the UK, with the majority of British cars powered by the V6 diesel. The V10 was rare to the extent that many Volkswagen dealerships probably never saw one. The good news is that it is widely regarded to be much easier to work on than the packaging nightmare that is the Touareg V10 TDI, which was pretty much wrapped around its engine. But the bad news is that any V10 still has the capacity to produce serious bills, with details like the £400 injectors and bork-prone electronic control boxes. Despite the ability to get north of 30mpg on a gentle run, you’re never going to run one of these on a tight budget. 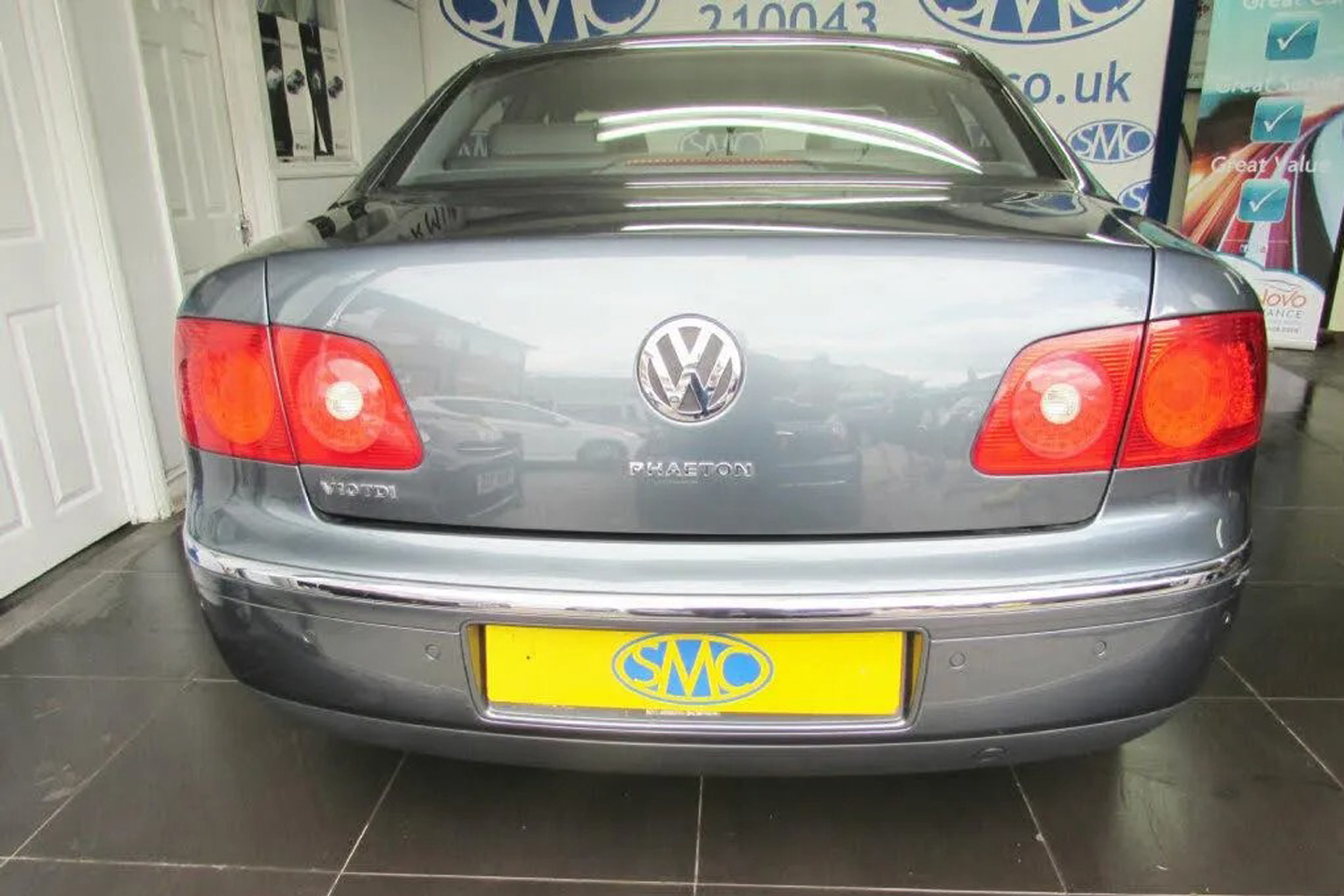 Yet they are still very attractively priced for what they are. Our Pill is an pre-facelift car from 2005 which has covered just 78,000 miles according to the dealer selling it. A glance at the MOT record behind the hidden plates shows that the last test on the current registration was passed in 2015, when it had covered 71,800 miles, so it has either spent a period off the road since then, or spent some time wearing another registration that hasn’t caught up yet. But the vendor is courageous or confident enough to be offering a three-month warranty within what really does seem like a very reasonable £8,995 price tag.

That’s stonking value for so much car, with so much engine – even if one that will probably soon have its freedom of movement limited by more low emissions zones. And when it is eventually banned from use it will be practically guaranteed a plinth in the Museum of Environmental Hatecrime.

THE STAGE 1 BUICK: This GSX 455 And Prototype GS 455 Showcase Performance